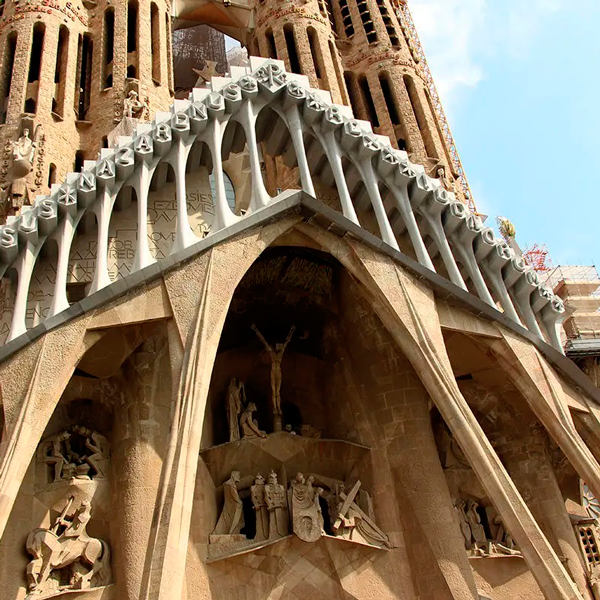 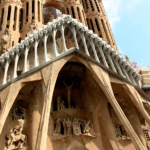 The history of the Sagrada Familia has more than 135 years of written pages and stories told since the first stone was laid.

Still under construction, the temple conceived by the incomparable Antoni Gaudí was a work promoted by and for the people of Barcelona. In this post we will tell you some secrets about the temple that started as the dream of a genius, and later became the icon of a city.

However, both the Sagrada Familia and the figure of Antoni Gaudí, its creator, have raised as many passions as rejections. Like any work that stands out for its originality, it generates conflicting opinions even among the people of Barcelona.

In fact, when Antoni Gaudí graduated, the director of the School of Architects, Elies Rogent, said: “I don’t know if we have given the title to a genius or a madman … Time will tell.”

I don’t know if we have given the title to a genius or a madman… Time will tell.

Elies Rogent
Director of the School of Architects when Gaudí graduated

History of the Sagrada Familia: the origins of the construction

One of the details most ignored by tourists is that the work was not conceived, initially, by Antoni Gaudí. Instead, he was the one who carried out the work and assumed responsibility for the idea of ​​Francisco de Paula del Villar after he was dismissed.

Due to some technical imbalances based on the cost of the materials, they management ended up dismissing Del Villar and a young architect took over, one who was beginning to stand out… it was Gaudí.

Once Gaudí takes over the project, he gives it a new orientation that will end up being fundamental in the history of the Sagrada Familia. What had been initially emerging as just another church, was about to change the future of Barcelona.

On March 19, 1883, Bishop Urquinaona placed the first stone of the temple, thus beginning the history of the Sagrada Familia. Visiting and getting to know the Sagrada FamiliaLa Sagrada Familia in Barcelona is one of those tourist sites that you must visit with obligation if you find yourself vacationing in the city. Its easy access allows a pleasant tour without leaving the downtown area. You can arrive by bus, metro, taxi or with a walk of about twenty minutes from the city center.

Now, visiting the Sagrada Familia takes time, so we recommend planning well ahead to secure a good experience. The temple is known as the great work of a genius, it is recognized as a World Heritage Site by UNESCO since 2005.

In addition, visiting the Sagrada Familia is a combination of tradition and innovation that will make this visit one of the most exciting memories of your trip. This is our way of motivating you to get to know and become familiar with the history of the Sagrada Familia, the rest is up to you.

The only great temple in the world that is still under construction awaits your visit. This unique monument deserves all your attention, every minute that you dedicate to it. That is why we recommend getting to know it with an expert local guide who will explain every detail and who can answer the many questions that will undoubtedly arise during your visit to Gaudi’s dream. At the end of the day, it is not always easy to understand a genius!

A construction against the clock

The construction of the Sagrada Familia fights against time to be completed in the year 2026, one hundred years after the death of its creator. Begun in 1882 with funding from believers, it is estimated that in five years it will be completed. It is estimated that approximately one third of the project remains to be built.

The temple has already been visited by millions of tourists while the history of the Sagrada Familia continues to be forged day by day. When it is finished it will be the highest temple in the world. If you can’t wait for 2026, keep calm: here’s a video showing what this wonderful work will look like.

Many of the citizens of Barcelona and some tourists with a passion for architecture wonder if the height of the imposing work will exceed that of Montjuic, the mountain with sea views located near the port.

However, it has already been confirmed that this will not happen. The Tower of Jesus Christ will measure 172 and a half meters. This height was intentionally intended not to exceed the height of Montjuic, created by God.

This tower will have a great verticality, with 18 meters in diameter and 60 in height, which makes it necessary to study its construction with virtual reality glasses as it does not have other references in the world.

No two stones are the same

There are seven industrialists behind the hand-carving of the stones, which achieves a unique experience in each of the rocks that make up and contribute to the history of the Sagrada Familia.

State-of-the-art techniques are used to carve the stone, the hand of man here also has a fundamental role. Hand carving ensures that no two stones are the same as each stonemason does the job in a very personal way. This is something that you can check when visiting the Sagrada Familia.

How to go from Barcelona airport to the center March 13, 2021